How to remove moles: is it safe to remove a mole yourself?

Like most people, you probably have a mole – or two or three – somewhere on your body. Moles are incredibly common. Some people are born with them, and others develop them over their lifetime.

What is a mole?

These small, coloured spots on the skin can be flat – much like a freckle – or raised, and they can develop anywhere, from head to toe. Recent studies have found that the number of moles you have – and where you have them – may be influenced by genetics, so it’s possible that moles could actually run in families.

But are moles safe, should they be removed, and can you remove them yourself? Let’s take a look…

The good news is that most moles are not harmful. In many cases, moles are simply a concentration of melanin – a natural skin pigment – which makes some patches of skin darker than others. However, some raised moles may feel uncomfortable at times, especially if they rub against clothing, and some people dislike the appearance of their moles, particularly if they are in a prominent position such as the face.

There are some instances where moles may be an indicator of something more serious. Some moles can be a symptom of a type of skin cancer called Melanoma. While melanoma is one of the most common types of cancer diagnosed in the UK, it is also highly treatable, especially if the disease is caught early.

Should moles be removed?

Moles that are normal – round in shape and even in colour – often do not need to be removed, especially if they are not causing discomfort. However, as some people do prefer to have their moles removed through cosmetic surgery, Bristol surgeons are often willing to discuss removal for aesthetic purposes.

However, there are some types of mole that should be removed, either because a biopsy has confirmed the presence of cancerous cells, or because changes to the appearance of the mole put you at greater risk in the future. It’s important that you know how to check your moles properly, and what to look out for.

The ABCDE approach is the easiest way to check moles:

Asymmetry – Is the mole an irregular shape?

Border – Does the mole have a blurred edge?

Colour – Does the mole have a mix of colours?

Diameter – Is the size of the mole greater than 6mm?

Evolution – Has the appearance of the mole changed recently?

If you answer yes to any of these 5 questions, you may want to consider mole removal. 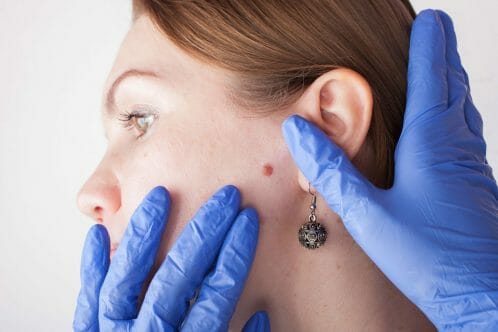 Can moles be removed at home?

There has been a growing trend over recent years for at-home DIY mole removal, especially with new creams and lotions hitting the market, but attempting to remove a mole yourself can be dangerous. There are 3 major risks when removing a mole at home:

1. Using creams and lotions may seem like the easiest way to remove a mole, but research shows that these products can increase the risk of keloid development. Keloids are large, raised scars, and in many cases they may be more noticeable and more frustrating than the mole itself!

2. Performing surgery at home can increase the risk of infection. It’s vital that both the tools and the environment are clean and sterile when dealing with an open wound so that bacteria cannot enter. This is very challenging to achieve in a home environment, which is why clinics are the much safer option.

3. The biggest risk of all is that you can’t be sure exactly what you’re dealing with without professional support. It’s possible that a mole may be cancerous. Cutting into cancerous cells at home can cause these cells to spread throughout the body, increasing the risk of other types of cancer developing.

If you are concerned about a mole, or you want to get rid of a mole for cosmetic reasons, it is always best to book an appointment with an experienced surgeon who specialises in mole removal.

What happens at an appointment?

Mole removal is a much simpler procedure than many people realise. Most moles can be removed quickly by numbing the skin around the mole with a local anaesthetic and cutting away the lesion. This is performed as an outpatient procedure, and you will be able to leave once the wound has been stitched.

Finding the right doctor for mole removal in Bristol

For safe and effective mole removal, Bristol Plastic Surgery is here to help. As a leader in our field, and with a strong team of board-certified plastic surgeons and aesthetic doctors, we perform mole checks and removal procedures without the long wait times of the NHS, giving you peace of mind that your concerns are being dealt with rapidly. Call us on 0117 910 2400, send an email to info@bristolplasticsurgery.com, or fill out our online contact form and we’ll be in touch shortly.