Is a mini facelift right for me?

Have you ever considered a mini facelift? This is an anti-ageing procedure which lifts your skin upwards using small incisions, removing excess skin, tightening your skin, and reducing the appearance of wrinkles.

If you have thought about having this cosmetic treatment, you may have wondered how it differs from a traditional facelift, what its main benefits are, and how long the results last. We have written this blog with you in mind – read on as we discuss the key elements of the mini facelift procedure.

What is a mini facelift?

Despite its name, a mini facelift is still a major cosmetic procedure. The procedure – which typically takes from one to one and a half hours – is able to remove excess or sagging skin from around the face, neck and jaw, that is the result of ageing. Using incisions made behind the ear in the natural folds, or the hairline, the procedure leaves no visible scarring.

It is usually performed using either sedation or local anaesthetic, and can be combined with a fat transfer which can restore facial volume that has been lost. This involves the harvesting of fat with liposuction, augmenting areas of the face to enhance facial structure and balance. 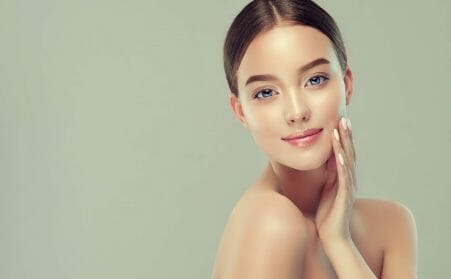 What is the difference between this and a traditional facelift?

Benefits of a mini facelift

Among the main benefits associated with a mini facelift is that you will not typically have to use general anaesthesia, and be unconscious for the procedure. This form of anaesthesia typically adds to the recovery time, whereas a mini facelift can be done using local anaesthetic, which means that your day to day life will be less disrupted and that side effects will be minimised.

As we’ve mentioned, mini facelifts typically have a shorter recovery time, as the area of the incision is smaller, reaching only the superficial musculoaponeurotic system (the tissue layer underneath the skin). A mini facelift is able to lift the deeper facial structures, without requiring the surgeon to go any deeper. This can reduce swelling and bruising following the procedure.

Then there is the advantage of less scarring thanks to a less invasive procedure than with a traditional facelift. Scarring is hidden by the face’s natural contours, and so is usually impossible to see with the naked eye without specifically looking for them. Ultimately, cosmetic procedures are also judged on their results, and mini facelifts are proven to be effective in addressing; skin laxity around the face and neck; wrinkles on the lower part of the face; and diminished definition of the jawline.

How long do results of a mini facelift last?

Everyone is different, and so there are various factors which can determine how long the results will last after a facelift, including your lifestyle and how the natural ageing process progresses. In general, you can expect results to last between five to ten years.

For more information about a mini facelift, and procedures for plastic surgery Bristol-wide, call Bristol Plastic Surgery today on 0117 910 2400 or contact us today